On Saturday, May 23 the European Design Awards 2015 celebrated the best in graphic design, illustration and digital design in Europe. TypeTogether succeeded themselves after Bree Serif’s win last year with the Gold award in the category 27. Original Typeface for Gerard Unger’s Alverata. 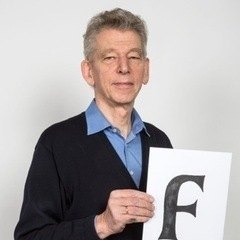 Legendary Dutch type designer Gerard Unger used a unique approach for the development of Alverata. He set out to design a contemporary type family, yet based on letter models from one millennium ago. The design is rooted in Gerard Unger’s research for his PhD on the shapes of Romanesque capitals in inscriptions of the eleventh and twelfth centuries. He then combined these surprising letter forms with the early twentieth-century model, tweaking them to prevent blandness and monotony.

The final product is a new and fiercely original typeface family, unlike anything else. Unger’s extensive expertise allowed him to produce a surprisingly versatile typeface that is in no way limited to display use. The open characters with large x-height are perfectly legible in body sizes, lending themselves just as well to text applications on both screen and on paper. Its letters combine a reassuring robustness with refined details, which reveal themselves as lively and attractive in large sizes.

Alverata is an extensive type family in six weights ranging from a crisp Light to a commanding Black, all with matching italics. Besides the Latin alphabet, the character set also comprises Greek – developed in collaboration with Gerry Leonidas (University of Reading) and Irene Vlachou (Athens) – and Cyrillic – in collaboration with Tom Grace.

The appearance of the typeface can be fine-tuned by choosing between its three variants. The Formal version gives the most conventional text image; the Informal borrows certain shapes from upright scripts to make it look more relaxed. Finally the idiosyncratic Irregular version is inspired by Insular letter forms, the uncials, and their constantly changing positioning.

Alverata strikes a balance between Europe’s diversity of languages, combining contemporary typographical practice with features of medieval letter forms, from the time when Europe came into being. You can see some of the source material and read more about the background and development of Alverata as part of Gerard Unger's PhD on the dedicated mini-site.

Read also about Lipa Agate’s Silver Award at the EDAwards 2015.