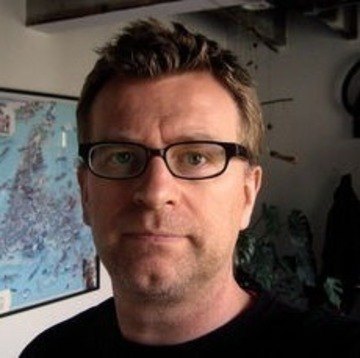 Born and raised in Newfoundland (newfoundlandlabrador.com), Bruce Alcock has worked internationally as a director for the past 19 years. He continues to develop a technique-agnostic approach to production: live action, CGI, drawing, painting, photo-animation, film scratching, stop-motion: whatever is right for the project.

Bruce studied tuba performance and comparative literature at the University of Toronto, then moved to Barcelona, where he apprenticed with animator Dirk Van de Vondel. Global Mechanic is his third production company; he founded Cuppa Coffee Animation in Toronto (1991) and Tricky Pictures in Chicago (1995). He also designed the font FF Soupbone.

His most recent short film Vive la Rose (nfb.ca/vivelarose), a co-production with the NFB (nfb.ca), is a heartbreaking story of unrequited love based on the Émile Benoît recording of the song. It is currently in its festival run, with stops so far at TIFF and Sundance among many others.