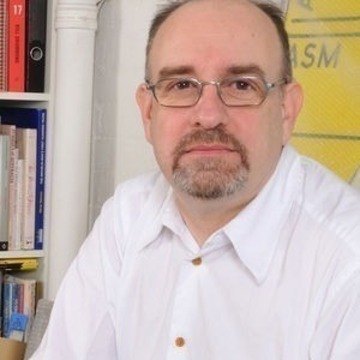 Malcolm Garrett is one of Britain’s best-known graphic artists, a pioneer of interactive design and the first interactive designer to be bestowed the honour of Royal Designer for Industry. Malcolm is visiting professor at the University of the Arts, London. He has also served as visiting professor in Interactive Communication at the Royal College of Art and external examiner at Trinity College Dublin. Malcolm was chairman of judges for the annual Design Week Awards (1999-2000), and a member of the BAFTA Interactive Entertainment Committee.
From 1994 to 2002 Malcolm led the interactive communications company AMX, which occupied the creative zone in the space where broadcasting, publishing, advertising and communications meet. Under Malcolm’s leadership AMX won awards for creativity, business effectiveness, and technical excellence. As a creative director for Immersion Studios in Toronto, and the Applied Information Group as well as Assorted Images in London, he continues to innovate today in the development of interactive cinema, collaborative learning software and environmental media systems.
Previously, Malcolm founded Assorted Images (in 1978) and, following his collaboration with Kasper de Graaf on the magazine ‘New Sounds New Styles’, co-directed the company until 1994, producing among other things, seminal artwork for artists like the Buzzcocks, Duran Duran, Culture Club, Simple Minds and Peter Gabriel. His work is widely regarded as a key influence on the development of contemporary UK graphic design. Along with other key figures working in the UK music industry he helped establish and promote a new design-driven culture which has defined today’s youth media market.
In 1998 he received a Prince Philip Designers Prize nomination in recognition of his achievements in design for business and society. In 2003 he was named by Design Week as on of the \"Hot 50 people making a difference in design\" for his work as design ambassador. One passion that does not belong to type design? The 1969 Plymouth Fury he has owned since 1980.