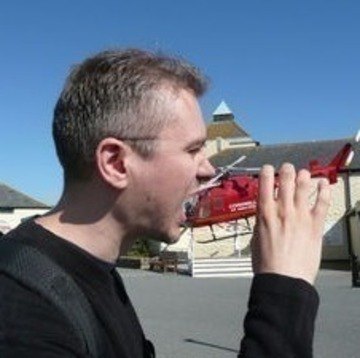 Born by the Essex seaside and raised in the English home counties on a diet of fish paste sandwiches and Frazzles, Pete Warren first cropped up when he designed a display type called FF Amoeba for FontShop International and his work was shown in Creative Review and Eye magazine.

Since then he has made a living as a typographic designer, digital designer and sound designer, developing specialist skills in areas such as interface prototyping, screen-based typography, type design and audio production.

Sound-wise, he's had his sound design nominated for a BAFTA Interactive Award, he's composed the theme tune to a Saudi Arabian TV show, his sound effects have been embedded into the microchips of toys and books, and he's had his electronic music played on BBC Radio 1. He's self-released an album which received positive reviews worldwide, is tiny in Germany, and positively microscopic everywhere else. Undeterred, this year he has co-formed a new band whose debut album is nearing completion.

The past four years Pete's been working full-time for the BBC, and has worked across the Radio & Music, News and R&D Prototyping departments, designing user-centred websites, ideating new BBC products, and developing innovative prototypes.