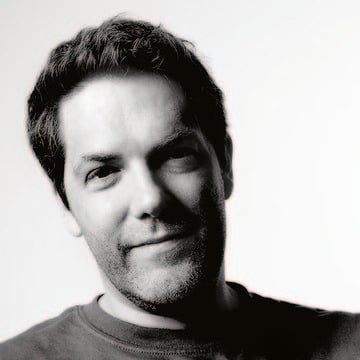 Rian Hughes is a graphic designer, illustrator, comic artist, author, and typographer. From his studio, Device, he has produced watches for Swatch, Hawaiian shirts, logo designs for Batman and Spider-Man, an iconoclastic revamp of British comic hero Dan Dare, and collaborated on a set of six children’s books with Geri Halliwell. A retrospective monograph, Device: Art, Commercial was published in 2002. Recent books include Cult-ure: Ideas can be Dangerous and Lifestyle Illustration of the 60s. His comic strips have been collected in Yesterdays Tomorrows, which was launched recently at the ICA, London.