With more than 2500 glyphs, Parfumerie is unique amongst the others in its style because it is based on the author’s calligraphy.

Designed by Sabrina Mariela Lopez in 2009 - 2011. Published by Typesenses.

Buy
Starts at $15 for a single style and is available for: 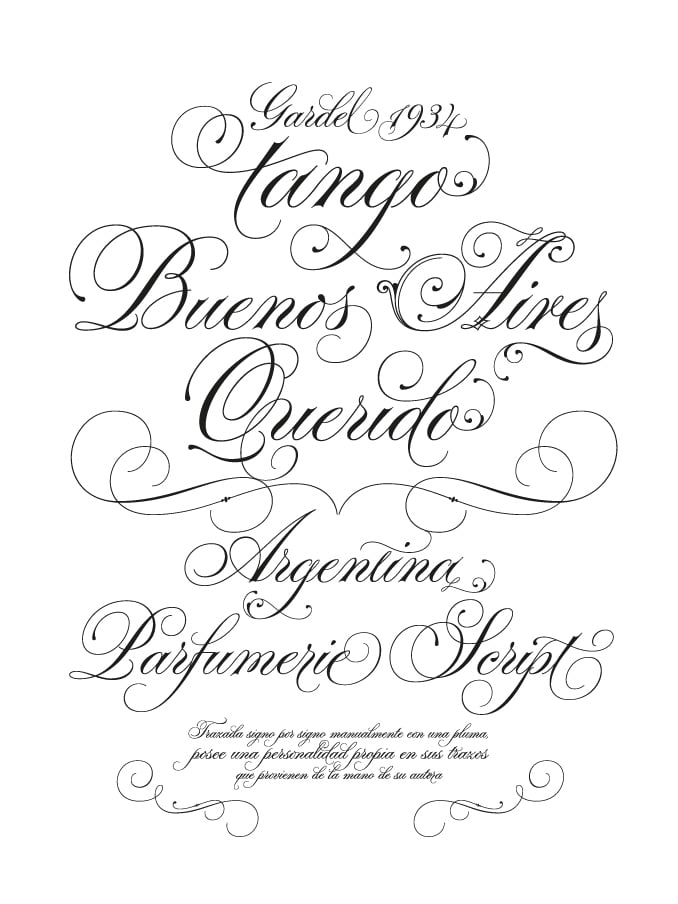 With more than 2500 glyphs, Parfumerie is unique amongst the others in its style because it is based on the author’s calligraphy. One of its variables is a Decorative option which combines Copperplate Calligraphy with an ornamental form native of Buenos Aires (where Sabrina lives), the ‘Filete Portenio’, which makes it look original amongst the other fonts.
Sabrina has exclusively designed this font for two years, with an obsessive adjustment, in order to provide the world with one of the best scripts ever made. With the idea of ‘Endless way to write a word’, lots of glyphs were Open-type programmed so that users can dive into many alternates and ligatures according to their language.

Parfumerie, as its name reflects, is attractive like a fragrance, delicate, elegant, sophisticated, feminine, sensual, glamorous, ornamental and decorative. It works perfect in the world of perfumes, make up, fashion, weddings, greeting cards, wines, chocolates, romantic novels, magazines, books. It is also versatile enough to be used in any kind of work because the user can choose between a wide range of possibilities: Standard Ligatures, Discretionary Ligatures, Required Ligatures, Contextual Ligatures, Historical Ligatures, Swashes, Stylistic Alternates, Titling, Contextual Alternates, Historical Forms, Initial Forms, Terminal Forms #1 #2 #3, 19 stylistic sets, 78 ornaments, 4 options of numbers, and up to 20 alternates per glyph in the Pro Version.

-Pro Version: With more than 2500 glyphs, It contains all the variants programmed with OpenType. The user should use the OpenType palette for some features and for others, the glyphs palette manually.

-Curly: With more than 600 glyphs, It contains the Curly variable with its own terminal forms, initial forms, ligatures, swashes, stylistic alternates, ornaments programmed with OpenType.

-Regular: With more than 1000 glyphs, It contains the Regular and Swash variable, with their own terminal forms, initial forms, ligatures, stylistic alternates, 2 stylistic sets, ornaments programmed with OpenType.

-Text: With more than 500 glyphs, It contains the text variable, ideal for paragraphs because its ascenders and descenders are shorter. It includes its own terminal forms, initial forms, ligatures, and ornaments programmed with OpenType.

-Old Style: With more than 500 glyphs, It contains the Old Style variable with its own terminal forms, initial forms, ligatures, and ornaments programmed with OpenType.

-Ornaments: It includes 78 ornaments. The same than the other variables but It is sold separately so it can be used in programs that do not support OpenType.