David Sudweeks interviews Emily Conners, who leapt head first into type design in 2011, learning both the craft and the trade at the same time. Her work, including the huge hit Bombshell Pro is in every wedding planner’s font menu, itself an invention that inspired its own subgenre of loose imitations. Emily is the original.

How did you first get into type? 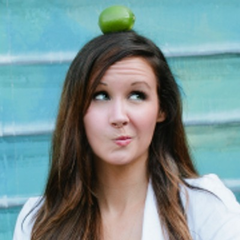 Emily: I was designing logos—doing packaging and branding. I was doing a lot of feminine work. And when I’d go out looking for fonts that would help me make someone’s branding, I wasn’t finding what I really wanted. So often I’d have to create it myself. I released my first font in 2011, and it took me quite a few months of work, if not a year before I was able to release it.

When you say feminine things, do you mean products marketed specifically to women?

Emily: Yes. Photographers, stationery companies. Things like that. Businesses that women started that were selling to women. Girly things. And that was what I enjoyed the most. A more feminine look.

So you got into lettering?

Emily: I don’t know that I would necessarily say that I got into lettering. I went from making logos straight into fonts. The very first one was my handwriting with a marker. It’s called Emily Lime.

Which is now your studio name. What’s the significance of Lime?

Emily: It’s because Emily Lime is a palindrome.

Oh, I see. Nice. Okay so at what point did you go from collecting and using fonts in your designs to making the realization that you could design your own fonts?

Emily: Well I think most people who do graphic design already understand most of what they need to know in order to design a working font. They just need a little more knowledge. So maybe I was naïve, but I said, ‘I can do this.’ So I went out and figured it out.

Your work got really popular really fast. You released a few typefaces and then …

Emily: Luckily then, I was ignorant of the larger market. I thought I’d put it out there and just see … It was well received, and by the time I released it, I already had others in the works. They were near done. It was after the third release I began to see that I could do this as a career. At first I didn’t think of that as a possibility.

And to publish them? How did you do it?

Emily: I put them on MyFonts and Etsy, and a few others. I didn’t have a website. I used social media and e-mailed my existing clients. I got a big response from DIYers, people making their own invitations, that sort of thing. And stationery designers.

Did you have a mentor?

Emily: No. And in a way I’m glad I didn’t. I was impatient, and had someone tried to stop me and tell me to fix what I was doing, they may even have changed my thoughts about releasing anything at all. Sometimes I have to tell myself to let go of it. Put it out there. Let people say what they want. In that way it’s not about great, well-executed design as much as putting out there imperfect things people will love.

And since then? Someone you’ve been inspired by or who’s made a personal connection?

Emily: Laura Worthington and Debi Sementelli were the people who paved the way. Laura reached out to me right after my second or third release just to say hello. And Neil Summerour got in touch not long after that. Both of them before I had been in business a year.

Emily: Don’t listen to anyone who tells you you have to make it more perfect before you put it out there. You may get rejected. Just keep going.

Thank you Emily. This interview has been especially motivating to me. Best of luck!