Designed by Albert-Jan Pool in 1995. Published by FontFont. 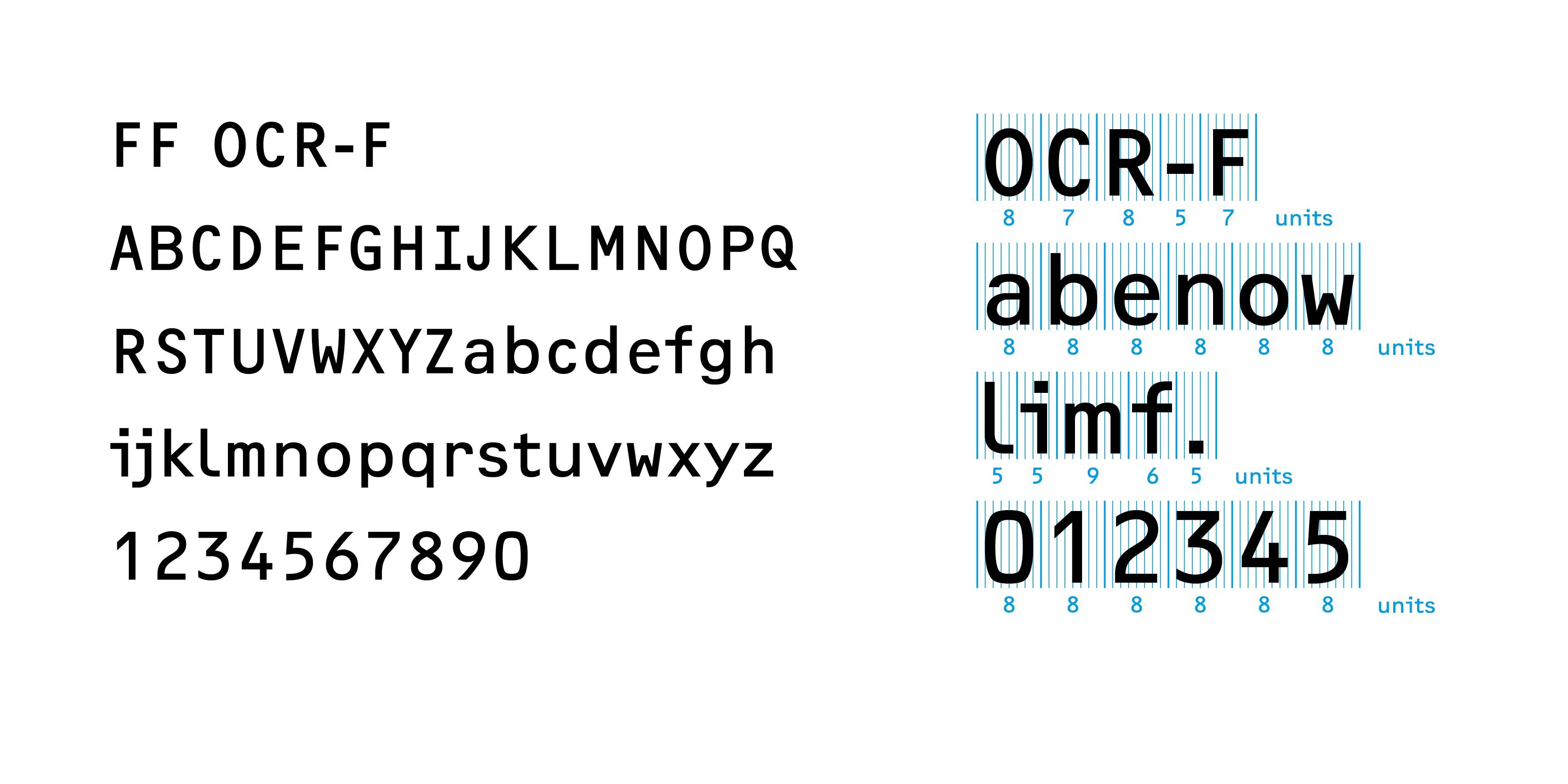 FF OCR-F came as the first in a series of “non-design” typefaces for the FontFont library. Technically oriented faces, such as DIN, Courier, Pica, or OCR-A and OCR-B have never seen so much demand in design as today. Art directors, magazine publishers, and poster designers love their cold, martial forms. At the same time, many would like to have a few more weight options and perhaps a quasi-proportional version of these faces available. FontFont’s FF OCR-F is a re-working of OCR-B, with two completely new weights – light and bold – and oldstyle figures. To give the proportionally-spaced typeface a monospaced aesthetic, the design was fit to a course grid of about 12 units to the em square. Wider letters like m, w and M and W were kept rather narrow, and i and I were permitted to keep their serifs. The work was undertaken by Albert-Jan Pool, also the designer of FF DIN. He described the context of the family as follows: “OCR-B was originally conceived in the late 1960s for ECMA, a European association of computer manufacturers. They had decided on enhancing their minimal standards of resolution and mechanisms of Optical Character Recognition for their machines and software. Until that day, they had used OCR-A, a typeface which suited the current practical needs, but only as far as machines were involved. Humans did not quite appreciate OCR-A. Computers as well as the piles of matrix-printed output they produced were far from user-friendly. OCR-B was devised to encourage a greater acceptance of computers. Adrian Frutiger was asked to design a typeface that took full advantage of the new standard. Once being an aesthetic compromise between the reading capabilities of man and machine, OCR-B has in fact come to technically outlive itself.”“When I was asked by Erik Spiekermann to re-work OCR-B for FontFont,” Pool continued, “I first considered this rather nonsensical. After all, Frutiger had also designed Univers, which can be considered as the typeface from which OCR-B had been derived. How could it make sense to improve OCR-B? It made me think of my teacher Gerrit Noordzij, who once said: ‘turning things upside-down does not always lead to improvement, but it surely makes them funnier.’ Seen from his point of view, there would be no excuse at all to do something with OCR-B. Still, I find it a rule which applies to the attitude that designers have when they play with OCR-B and similar typefaces. So why not do OCR-F in that manner and supply them with a useful toy?”